How the Medici Shaped the Renaissance

Relive the passion, intrigue, and astonishing exploits of the Medici, and discover the roles this unique powerful family played in an era that changed the Western world.
How the Medici Shaped the Renaissance is rated 4.1 out of 5 by 45.
Share
Rated 5 out of 5 by Lorenz from Excellent series. So intriguing that I sat for all six lectures at one time and could have wanted more. Extremely well done and comprehensive in its approach.
Rated 5 out of 5 by AnneJ from Excellent course Very well done, very interesting, and with interesting tid bits of information that I didn't know before.
Rated 5 out of 5 by Ricky Ticky Tavy from Excellent Presentation and very interesting. I found this course very interesting and informative,
Rated 4 out of 5 by Lynn F from A GREAT LISTEN The professor explains a very complicated family history in a clear, informative and articulate way. But I cannot recommend the video. Aside from a few illustrations, which are repeated over and over, it was not worth watching. Seeing the professor read the teleprompter is distracting, and the subtitles are laughable (i.e., Bargello becomes Bar Jello)! Again, listen but don't watch.
Rated 5 out of 5 by wooknight from An excellent introduction to the medici I had no idea how influential the medici were to the renaissance until I went through this course . Now a trip to Florence has become essential
Rated 5 out of 5 by Virginia Gentleman from One family can make a difference A closeup of how Florence and its ruling family shaped the development of the west. Also, I had never appreciated how truly crippling gout was before modern medicine
Rated 5 out of 5 by UPB1 from Medici - Architects of Renaissance I was aware of Medici family's influence on the renaissance since I watched the movie 'Agony and ecstasy' as a child. Couple of years ago I watched 'Medici Masters of Florence' and it really intrigued me. When I saw the title available on Great Courses, I purchased it and I am truly delighted with the contents of the course. It gave me insight into the Medici dynasty and their impact on art and culture of Europe. I would recommend this course for history enthusiastics.
Rated 4 out of 5 by Bob 229 from Why is there no subtitle? As far as I understand, only those very old videos have no subtitle. How come this relatively new one has none, too?????? If so, it may not be suitable for people who have a hearing problem. The Great Courses should have stated it clearly.

The extraordinary Medici family ruled the city-state of Florence for three centuries and played a key role in the world-changing phenomenon of the Renaissance. In How the Medici Shaped the Renaissance, scholar William Landon leads you through the dazzling trajectory of the Medici, where you’ll trace the founding of the Medici dynasty as an economic powerhouse. Learn how the Medici played central roles in the preserving of classical texts and the commissioning of iconic works of art and architecture. Encounter Medici luminaries from Lorenzo the Magnificent, a political genius of the highest order, to Catherine de’ Medici, cultural influencer and queen of France. Lastly, follow how the Medici were exiled from Florence and returned to power numerous times, ultimately becoming hereditary rulers. 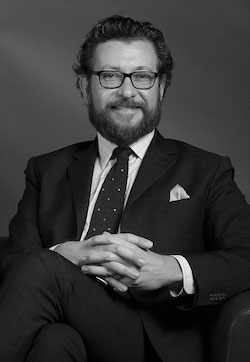 In the hands of an objective truth-seeking historian, the fullness of your experiences, what we might call your humanity, would emerge, the good mingled with the bad, the real you treated fairly.

William Landon is a Professor of History at Northern Kentucky University. After chairing the Department of History and Geography for four years, he returned to full-time teaching and research. He received his MSc and PhD in History, with a particular emphasis on the life and works of Niccolò Machiavelli, from the University of Edinburgh.

Throughout his career, William has given lectures in North America, Europe, and Asia. He is the principal investigator for a multiyear National Science Foundation grant awarded to provide undergraduate students with training for the real world. He has published numerous articles, book chapters, and reviews on Renaissance-centric themes, and he is also the author of two books: Politics, Patriotism and Language: Niccolò Machiavelli’s “Secular Patria” and the Creation of an Italian National Identity and Lorenzo di Filippo Strozzi and Niccolò Machiavelli: Patron, Client, and the Pistola fatta per la peste/An Epistle Written Concerning the Plague. The latter included the first English biography of Lorenzo Strozzi and was nominated for the Renaissance Society of America’s Phyllis Goodhart Gordan Book Prize in 2013. 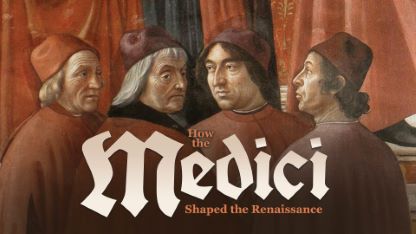 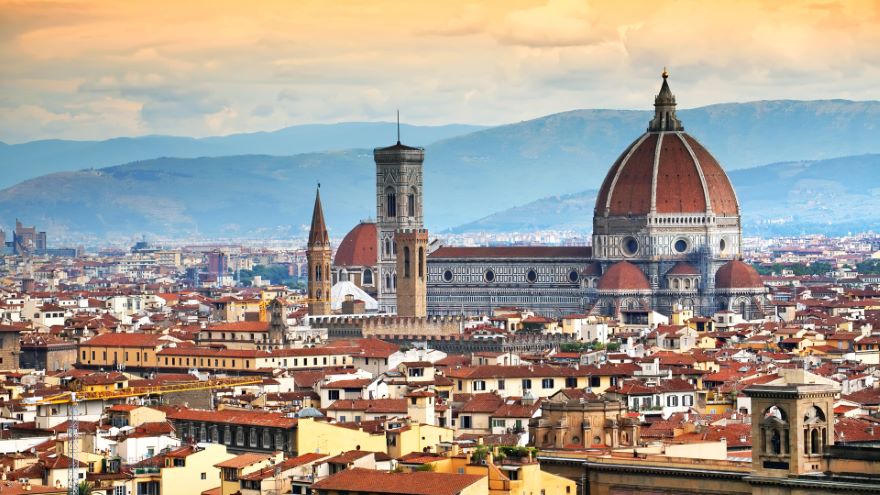 01: Florence at the Dawn of the Renaissance

Begin by considering the pervasive “Medici Myth” surrounding the illustrious family—the “White” myth, which extols their achievements, and the “Black” myth, which harshly criticizes their influence. Take into account the historical methods that will be used throughout this course. Also explore the social and political conditions within 14th-century Florence that gave rise to the Renaissance. 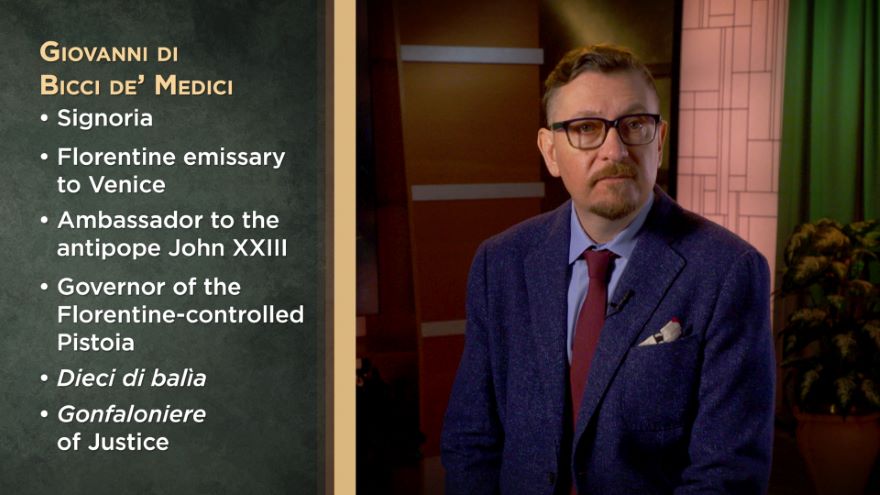 02: The Foundations of Medici Greatness

Chart the extraordinary life of Giovanni di Bicci de’ Medici, considered the founder of the Medici family. Learn how Giovanni founded the Medici bank, and rose through banking and government to a position of great wealth and eminence, building a coalition of Florentines dedicated to Medici interests. Observe how the Medici family and bank became a controlling interest in Florentine politics. 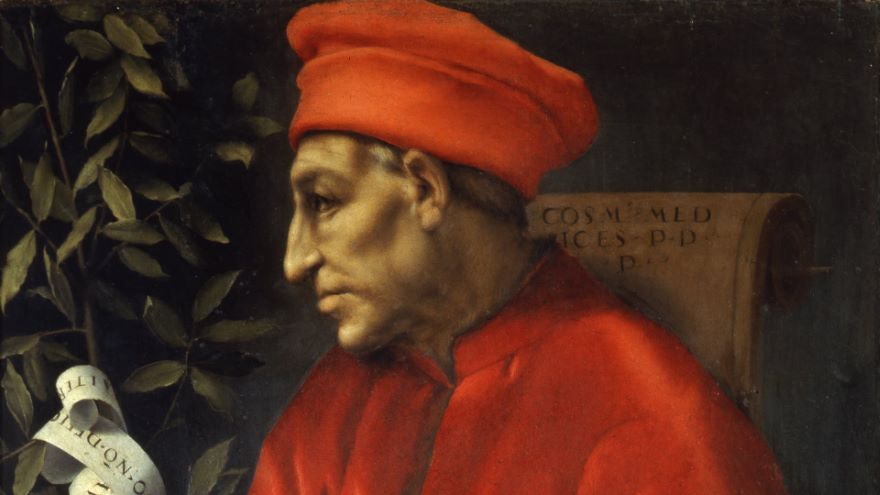 Cosimo de’ Medici, heir to Giovanni, took the reins of the Medici family and its dynasty. Grasp how Cosimo amassed power through patronage of the humanities and financial dealings with government. Witness the crises through which he ultimately dominated the Republic of Florence, highlighting the role of the Duomo Cathedral and the astonishing story of his exile and return to Florence as ruler. 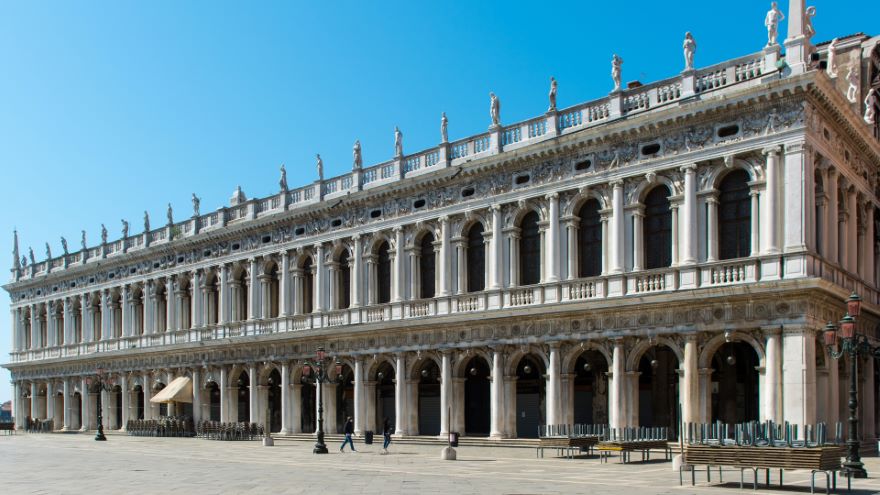 Learn how Cosimo de’ Medici undertook to make Florence the most beautiful city in Europe, commissioning numerous public buildings and masterpieces of art. Then follow the brief reign of his son, Piero, whose skillful navigation of currents of dissent and revolution, aided by the brilliant partnership of his wife, Lucrezia, solidified the foundations of the Medici dynasty. 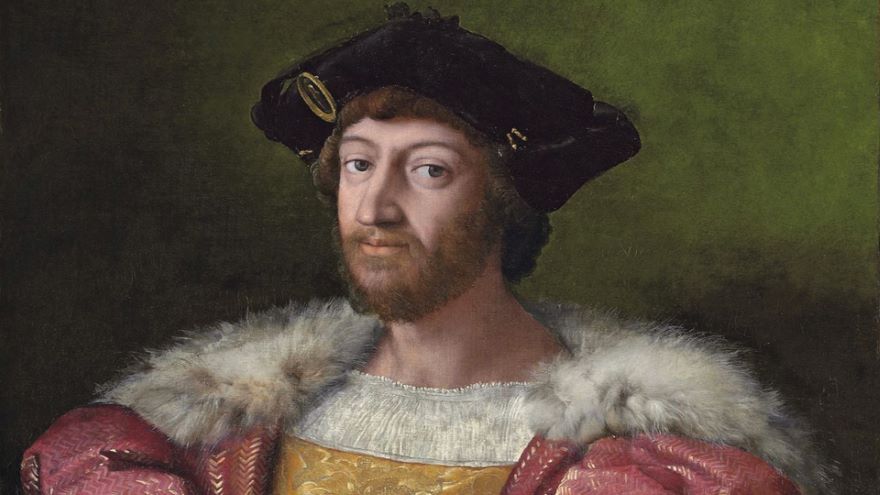 Delve into the early life of Lorenzo, the most celebrated of the Medici, where he excelled as a poet, author, and diplomat. Grasp how Lorenzo skillfully balanced his obligations to the state with his love of art, family, and fine living. Witness his ascent to become chief advisor to Florence’s government, and the political trials that led to a conspiracy and attempt on his life. 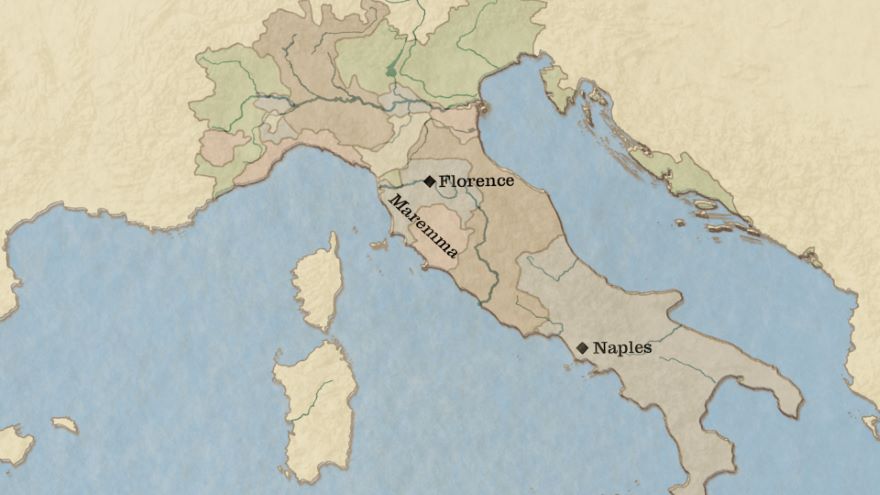 Assess the extraordinary accomplishments and influence of Lorenzo de’ Medici, called Il Magnifico. Observe how, excommunicated by the pope and facing vast political challenges and threats of war, he almost single-handedly held Italy peacefully together, balancing the powers of Venice, Milan, Naples, and Rome, while maintaining his family’s wealth and its grip on Florence. 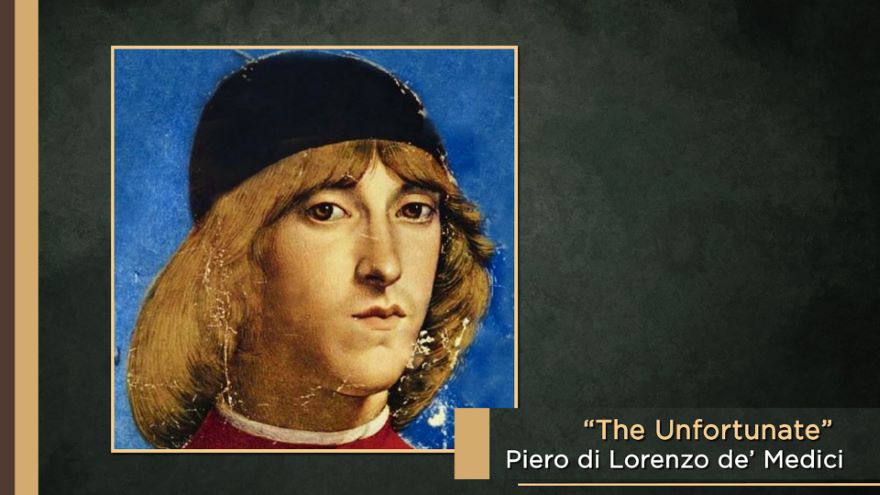 07: The First Collapse of the Medici Regime

Examine the extraordinary circumstances of Lorenzo de’ Medici’s decline and death, highlighting the role of the politically influential friar, Girolamo Savonarola. Follow the highly charged events surrounding Piero de’ Medici’s assumption of power, and the outbreak of bloody war which ultimately forced Piero and his brothers to flee into exile, ending 60 years of Medici power in Florence. 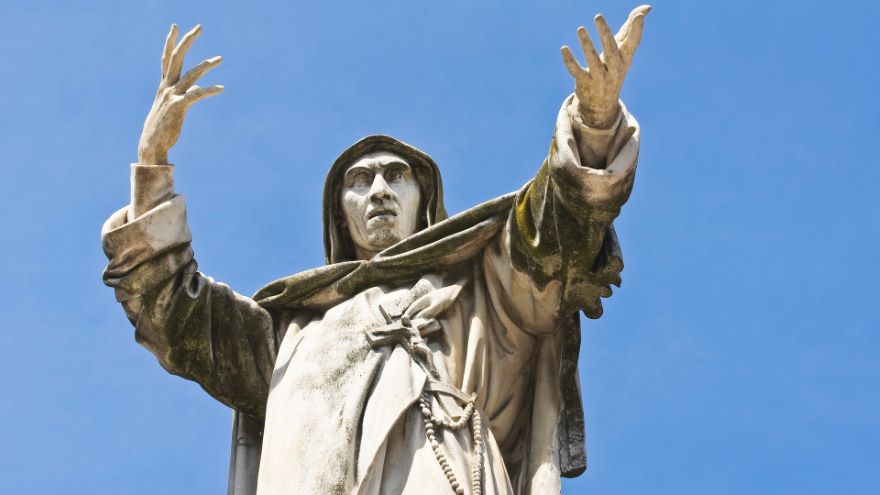 08: Theocracy and Republicanism at Florence

Relive the period in which the Florentine Republic was reinstated in a populist revolution overseen by the religious figure of Savonarola. Trace the upheavals that led to Savonarola’s fall, and the maneuvering by the Medici in Rome to ally with the papacy and the Spanish. Witness the military actions through which, after nearly 20 years in exile, the Medici returned as rulers of Florence. 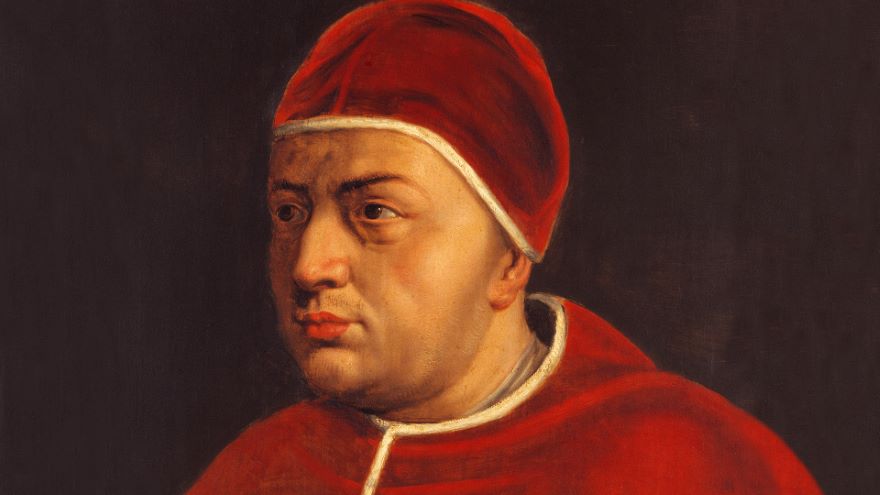 Study the political landscape of Florence under the direction of the Cardinal Giovanni de’ Medici and his younger brother, Giuliano, the secular head of the family. Learn the dramatic story of the ensuing conspiracy to assassinate Giuliano, and Giovanni’s elevation as Pope Leo X. Observe the internecine struggles within the family culminating with a second Medici pope and the brutal sack of Rome. 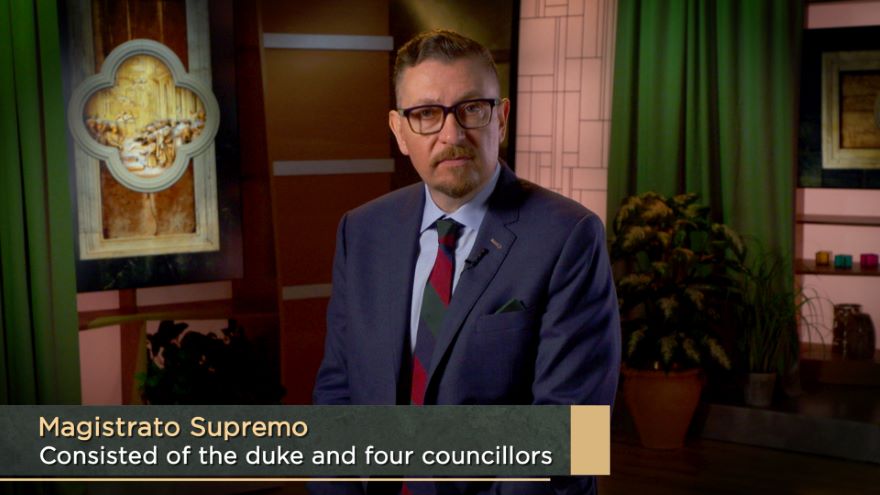 Following the expulsion of the Medici from Florence in the wake of the sack of Rome, study the divisions that plagued the final Florentine Republic. Witness the political alliances that led to the siege of Florence by the Holy Roman Emperor, the events ending in the return of the Medici to the city, and the rewriting of the Florentine constitution, naming the Medici as hereditary rulers. 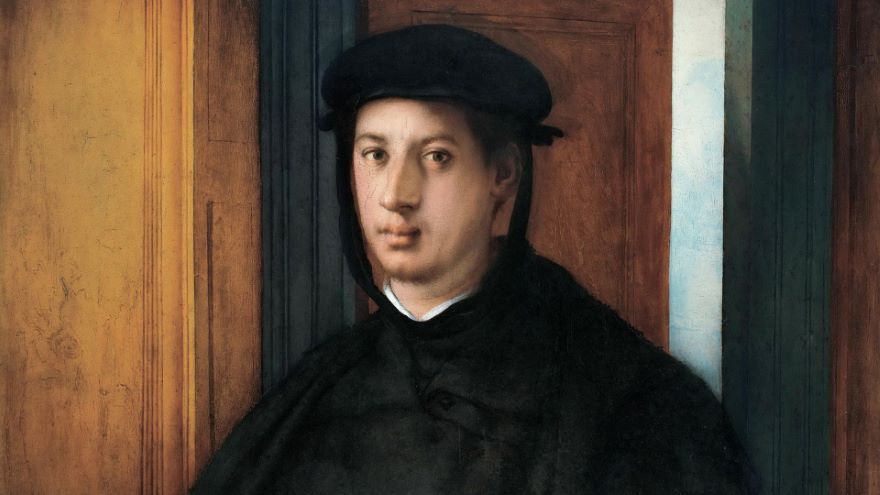 Carefully consider Alessandro de’ Medici, a debauched and cruel ruler. Learn about the “cult of Brutus,” a movement that believed in assassination to achieve republican goals, and its connection with the sordid death of Alessandro. Then, encounter his successor, the ruthless and capable Cosimo de’ Medici, who further solidified Medici power, as well as Florence’s stature and independence. 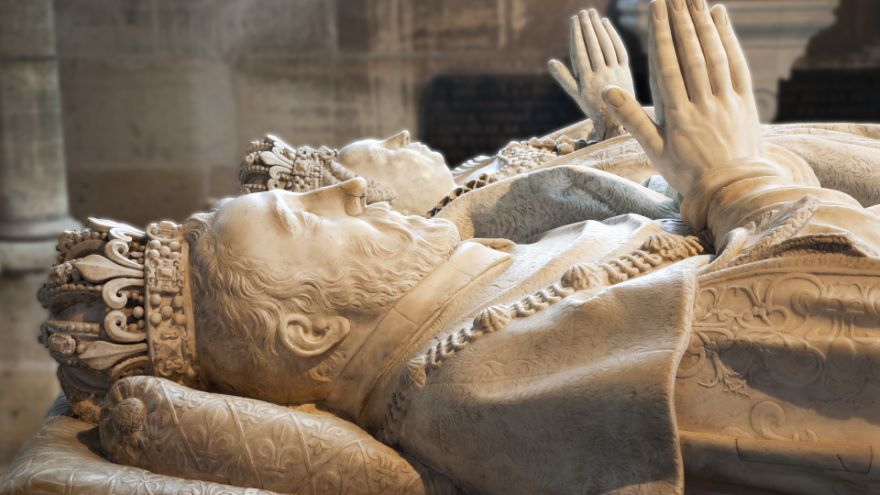 Conclude with a view of some of the later Medici luminaries. Among them, assess the accomplishments of Cosimo de’ Medici, granted the title of Grand Duke; the judicious Ferdinando de’ Medici, whose civic and social policies attended a new era of prosperity; and Catherine de Medici, who imported Florentine culture to France as the French queen. Finally, learn about the Medici dynasty’s decline.